What Does It Mean To Fear God?

When one is replacing “Fear” with “Respect” or “Reverence,”  we have to understand this is a respect that goes far beyond human understanding…  the only way I can explain it is that it is a respect for God…  so big, so enormous, so humbling that you would never ever think of running away from Him.

The only way to truly understand this kind of respect is through knowing God in an intimate personal relationship.  “The fear of the Lord is the beginning of wisdom, And the knowledge of the Holy One is understanding.”  Proverbs 9:10 (NKJV)

Scripture is full of examples of how fearing God is a positive rather than a negative thing. For example, in Genesis 42:18, Joseph gains his brothers’ trust when he declares he is a God-fearing man. Pharaoh brought disaster on his nation because he did not fear God Exodus 9:29-31. Moses chose leaders to help him on the basis that they feared God and wouldn’t take bribes Exodus 18:21. You may think this is only an Old Testament idea, however, Jesus states this stronger than anyone when he says, “Don’t be afraid of those who want to kill your body; they cannot touch your soul. Fear God alone, who can destroy both soul and body in hell” Matthew 10:28. And Paul says to work toward complete holiness because we fear God 2 Corinthians 7:1.

So… fearing God is good because it saves us from caving into our own sinful nature. If someone fears God, they are more likely to keep their word and react to others with kindness and love. Romans 3 is a classic chapter on sin and says our chief sin is that we “have no fear of God at all” Romans 3:18.

Of course, the ultimate example of fear and perfect love working together is Jesus Christ. He warned us at every turn to fear God, not men, and he confirmed that in everything about his life and death. He spoke lovingly but frankly to all and didn’t mince words when people needed to face their sin and repent. But he also demonstrated love beyond human understanding when he lived out his words, “There is no greater love than to lay down one’s life for one’s friends John 15:13.”

With love like that, there is nothing left to fear but God. 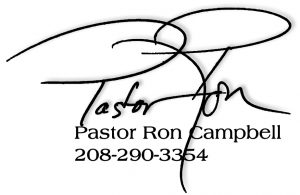 Categories: From My Notes

God Gives Us Resources To Use And Invest For Him.

Our Faith… Weak or Strong?

All of us are all weak in some areas and strong in others. If we can interact with sinful people without falling into their patterns, we are strong in that area of our faith. However, Read more…

Consider it pure joy whenever you face trials of many kinds – James 1:2 James didn’t say, “If we face trials,” he said “whenever.” He knew we would have trials, in fact many trials and Read more…